Revisit one of the exercises on daylight, artificial light or controlled light from Part Four (Ex 4.1, Ex 4.2 or Ex 4.3) and develop it into a formal assignment submission. The submission requirement for this assignment is a set of between six and ten high-quality photographic prints.

There are many ways to edit and the most valuable one is probably to show your work to friends, family and your OCA peers for feedback – you are guaranteed to discover something new in your work. Another tip is to pin the work up on the wall and live with a for a few days. ‘A Quick Guide to Editing Your Photo Series using Stickies’ on the IPO (Invisible Photographer Asia) website, but bear in mind that this is not a narrative assignment – you’re not required to produce a story.

Assessment of photography in any context is an assessment of images and accompanying words so please Include a written analysis of your work outlining:

• your technical approach and any particular techniques you incorporated

Conclude your notes with a personal reflection on how you’ve developed the exercise in order to meet the descriptors of the Creativity criteria. Write 500–1,000 words.

It was clear from the outset that I wanted to explore exercise 4.3 Egg or Stone further as I thought this would help me advance some of my other work such as assignment 2 which I plan to revisit shortly. Aside from using DTP setups and largescale camera machines when I worked in publishing, I had not carried out any serious studio photography, except for some flower photography I had done a few years ago. So in order to prepare further for this assignment I carried out another studio exercise with my partner Debra which you can find here.

I decided that I would like to revisit my previous fascination with flower photography and as such look for practitioners whom had worked in a similar field or capacity. In revisiting this assignment I wanted to answer the question, why flowers? On the one hand this is a subject that has been extensively covered by photographers, artists and philosophers alike over the centuries. From my own point of view aside from the fact I have a keen interest in horticulture, though still very much a beginner, flowers to me are quite delicate, very beautiful and vibrant with colour, Some can survive quite hot and humid environments whilst others endure cold and wet seasons.  It was while I was sat  reflecting on the feedback I had received from my tutor, I was also reflecting on my own life and experiences, being ever aware of my own mortality as time passes by. In front of me by the fireplace lay a vase of flowers, wilted having seen much better days, yet the was still an echo of beauty that lay within them, an appreciation of that which was once was. So I started thinking about life and death and the symbolism that flowers play within that. Flowers are often used to celebrate events from weddings, funerals, remembrance, celebrating life or an expression of love. Further to that I started looking at the symbolic nature flowers played in relation to life and death as I started to think about these two states that I would eventually document in revising my approach to this body of work. It was interesting to find that flower symbolism exists in just about every culture in the world in Asian culture the Lotus flower is said to represent the seat of Buddha, whilst Ancient Egyptians used the Lotus to adorn the mummified remains and was said to represent the new life the dead souls had entered. The Chinese use flowers devoid of colour to adorn wreaths of white iris in traditional funeral arrangements often containing white envelopes with money to help cover funeral costs. Anemones crop up in Greek mythology as a flower of death as a result of the flower that grew from the blood Adonis spilled as he lay dying from a mortal wound in a hunting accident. In Christianity the same red flower is said to represent the blood spilled by Christ as he was dying on the cross. For the Romans it would be red roses that would symbolise death and would often be seen planted on the graves of loved ones. Christians on the other hand saw it as a symbol for Mary, the mother of Christ and in modern times roses seem to symbolise love and are often the flower of choice on valentines day. To the Indians of Mexico carnations are considered to be flowers of the dead, which may explain why this flower often adorns costumes and headwear in the Day of the Dead celebrations. The Poppy is considered a flower of remembrance and commemorates the fallen in World War One, where poppies grew on the graves of the dead of the fallen at Flanders.

In looking at other practitioners, I came across the botanical works of Imogen Cunningham (1883-1976) a world renowned photographer who was interested in nudes and botanical forms amongst other things and became a founding member of the F.64 Group along with Ansel Adams. I took a look at a library of her botanical works which were very striking, sharp, making great use of the fauna and natural light of California. This image below serves as a great example of one of her photographs of Callas in natural light. In addition I am captivated by black and white photography, it always seems to add an extra level of definition to a subject when photographed.

From bold statements of light and shadow shown in her images of succulents to the delicate and sharp focus of Callas, which I had only seen previously at the Eden Project several years ago. You can view some of Imogen Cunninghams botanical work here

“The formula for doing a good job in photography is to think like a poet.”

The next photographer I looked at was Harold Feinstein (1931-2015) who started his career at the age of 15 and became a member of the photo league at 17, which was essentially a co-operative of New York based photographers working together on a range of social and creative causes. In addition Harold was involved in the early New York City street photography scene and has since built a career around a range of subjects. What drew me to Harolds work was his use of scanography, a technique of using a digital scanner as a camera, which is illustrated in the works he created in producing the book 100 Flowers. Initially I was drawn in thinking this was some very cleverly crafted studio shots. That said he produced a beautiful collection, which has since been added to with 3 further books on flowers covering Orchids, Tulips and Roses.

So for this exercise I setup a studio back using our kitchen and/or conservatory space to produce a number of shots using a single light source, in this case a Neewer 60cm x 60cm softbox fitted with an 85 watt 5500k tri-phosphor bulb. This light was positioned primarily from the left and altered accordingly to provide a variation in the amount of light dropping onto the subject.  The camera was set to manual using a Canon 6D with Canon 24mm-70mm Lens mounted on a tripod. The shoot took place in two sittings approximately a week apart to illustrate the two states I wanted to illustrate for the brief. I had also decided to use lightroom to balance the shots and present the finished images as diptychs, showing both states side by side. 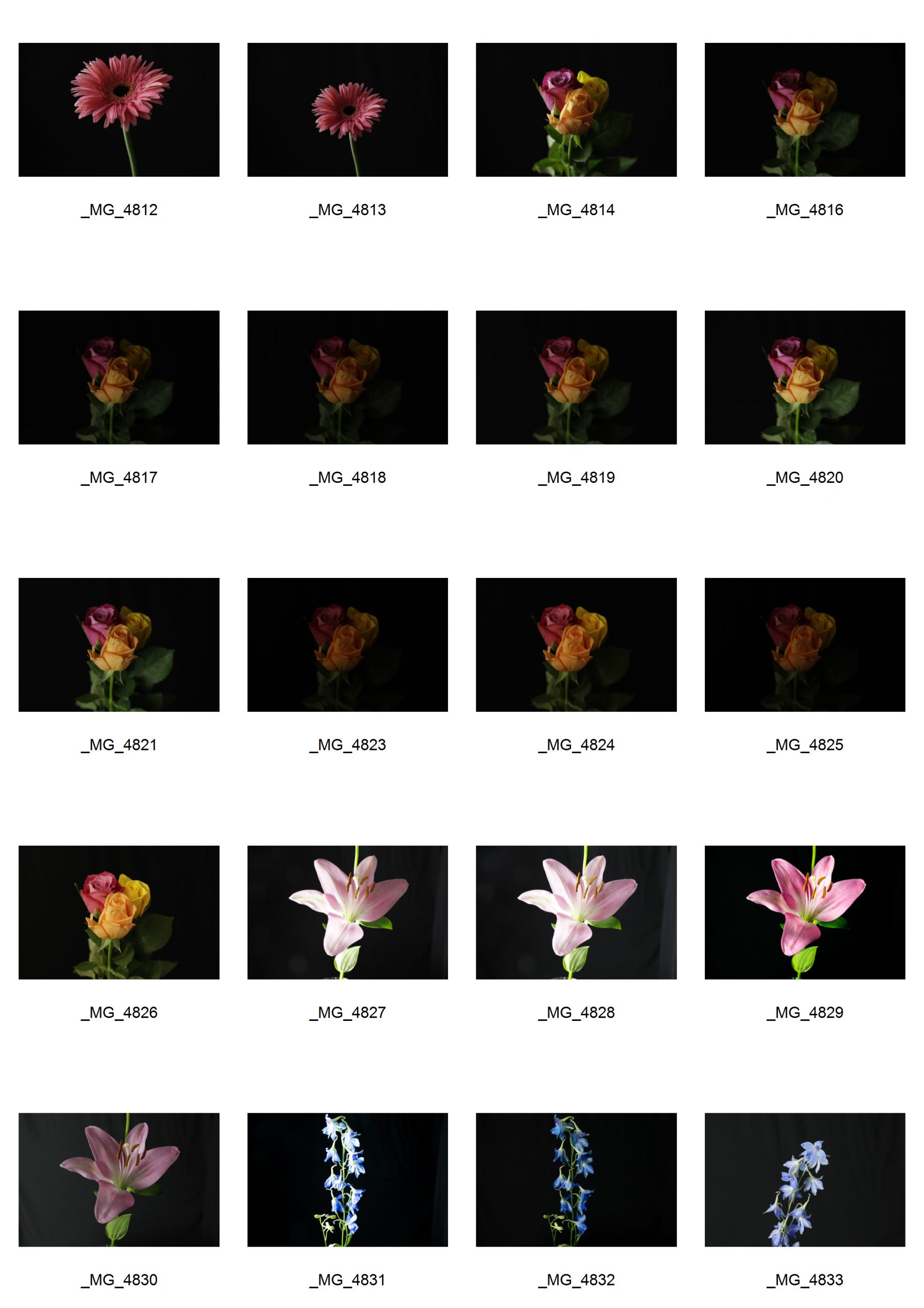 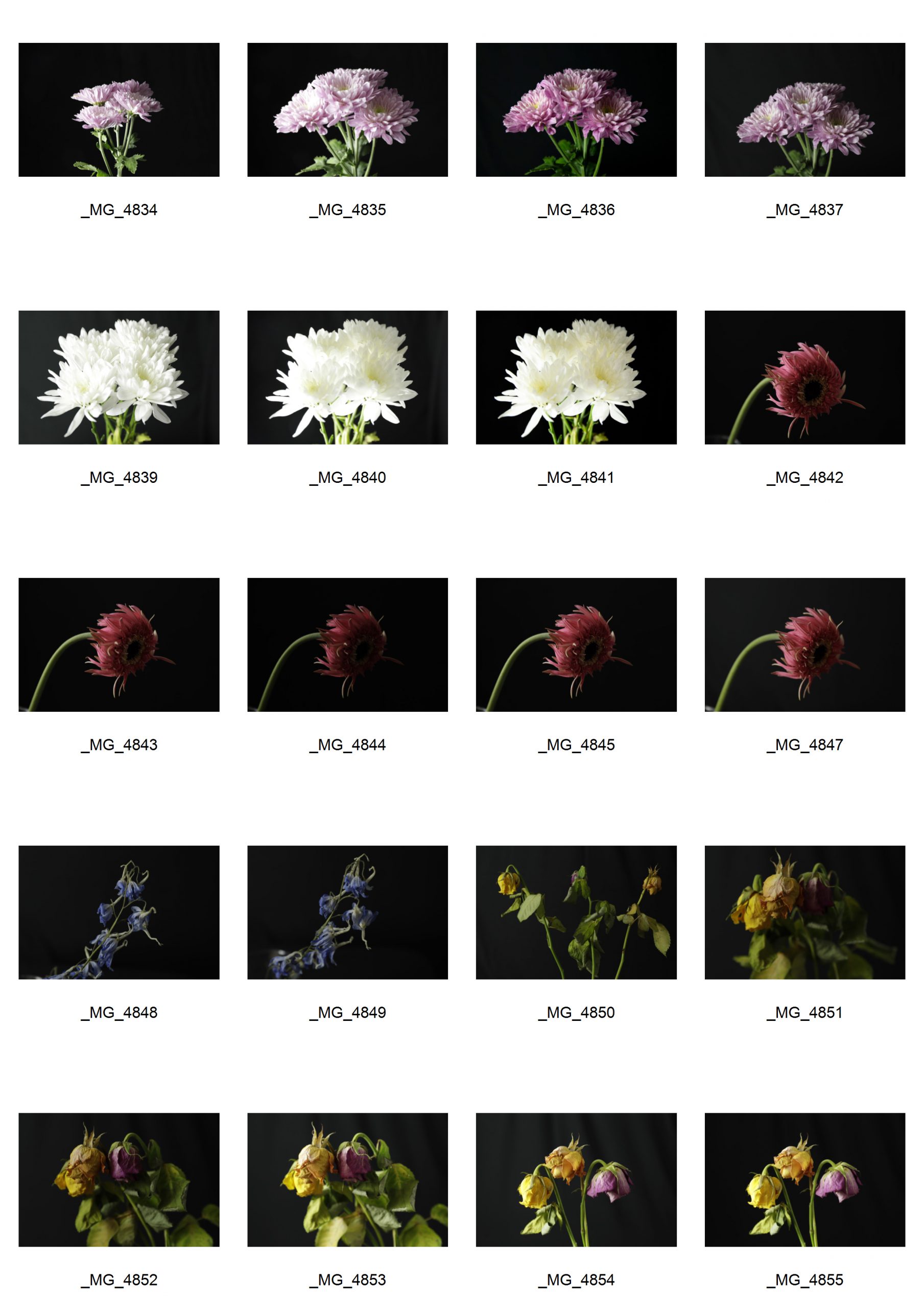 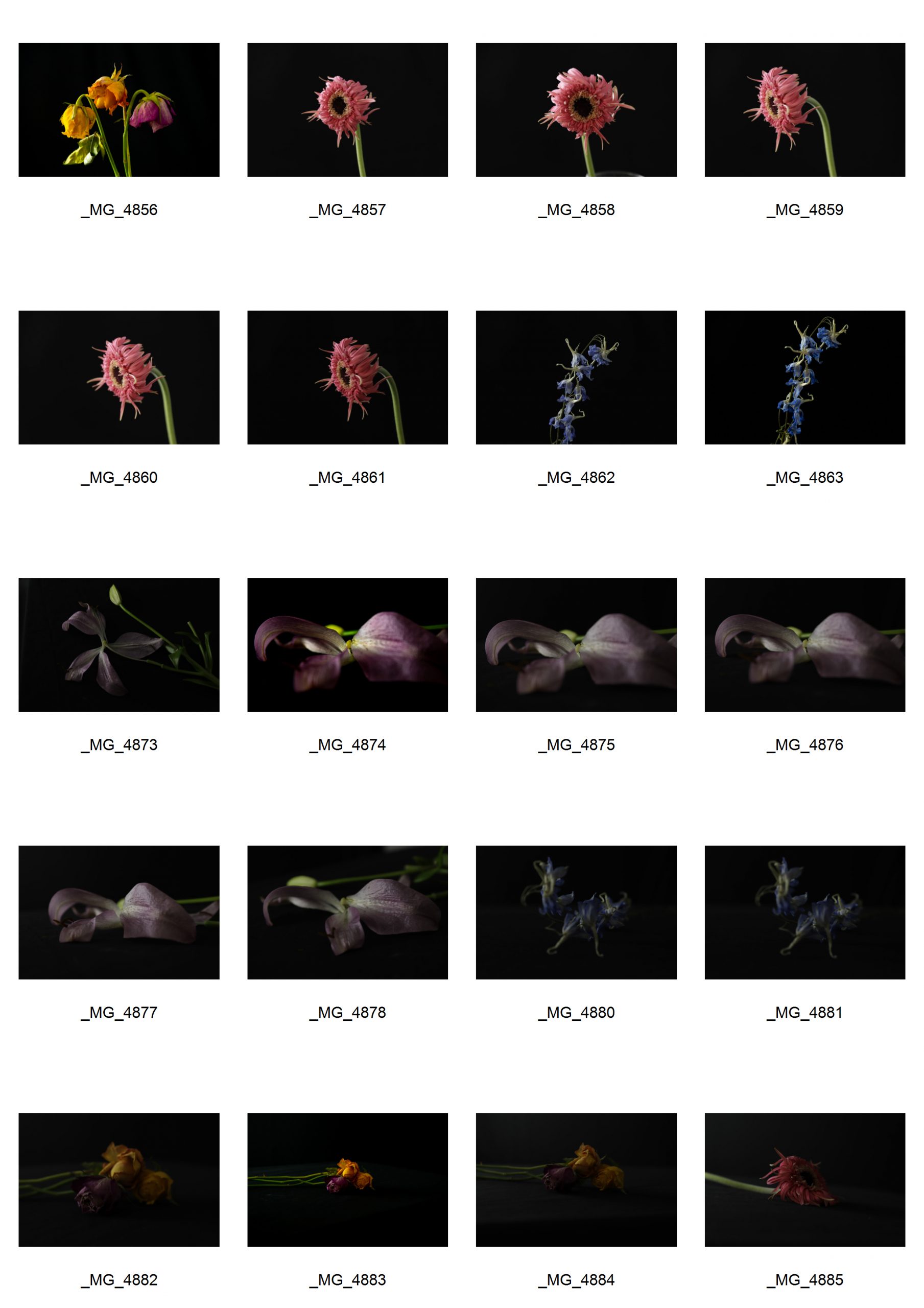 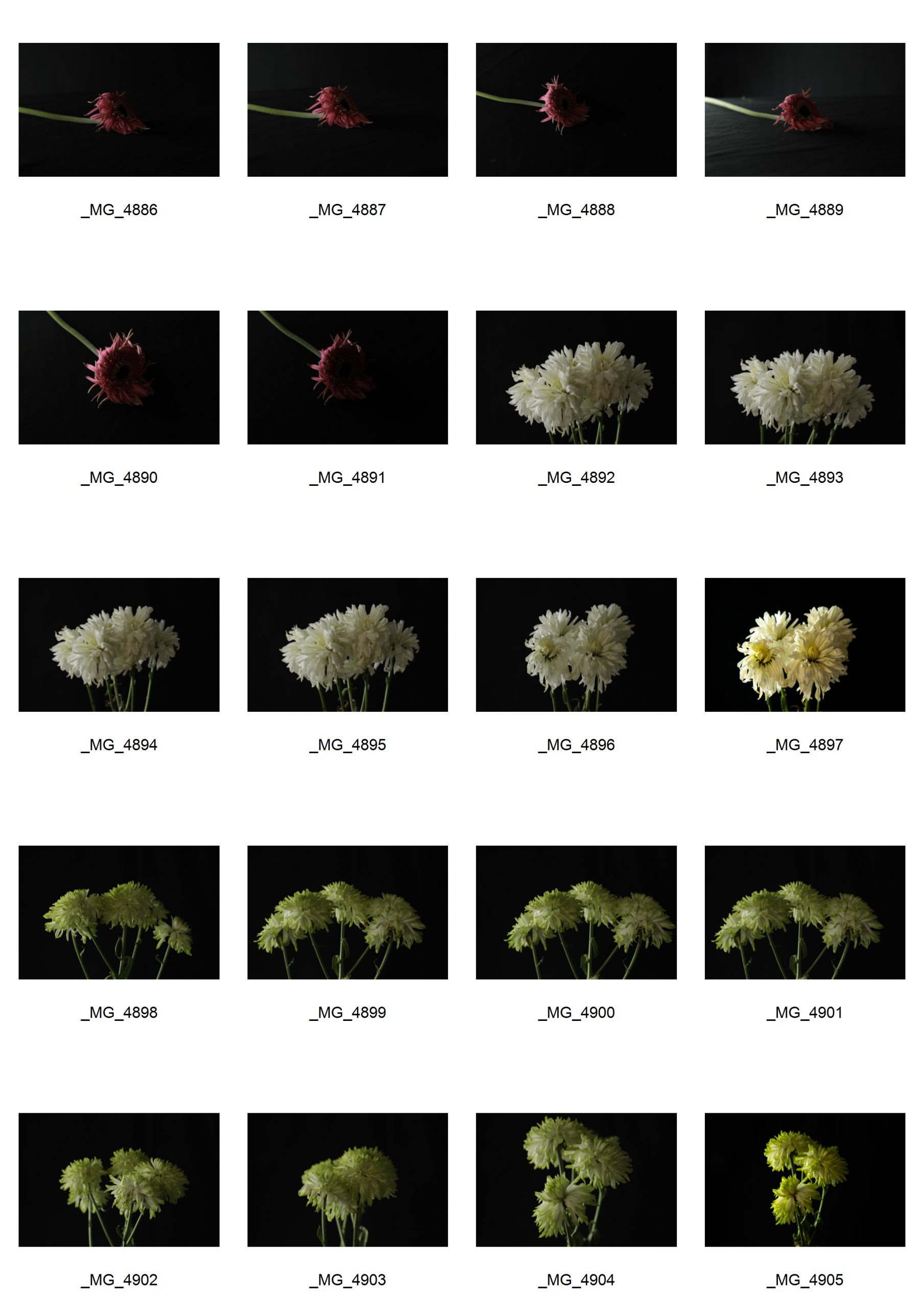 So the final selection I have chosen to present as a series of diptychs showing each of the subjects in the peak of full bloom and vibrancy and in the latter stages of decay. The most challenging of these proved to be the roses and the lily. The roses became very delicate in the latter stages and had to be taped together at the stems to get the result I wanted from them. The lily on the other hand just seems to fall apart when out of bloom which meant have to reconstruct a deconstructed flower, which proved to be interesting but enjoyable nonetheless. 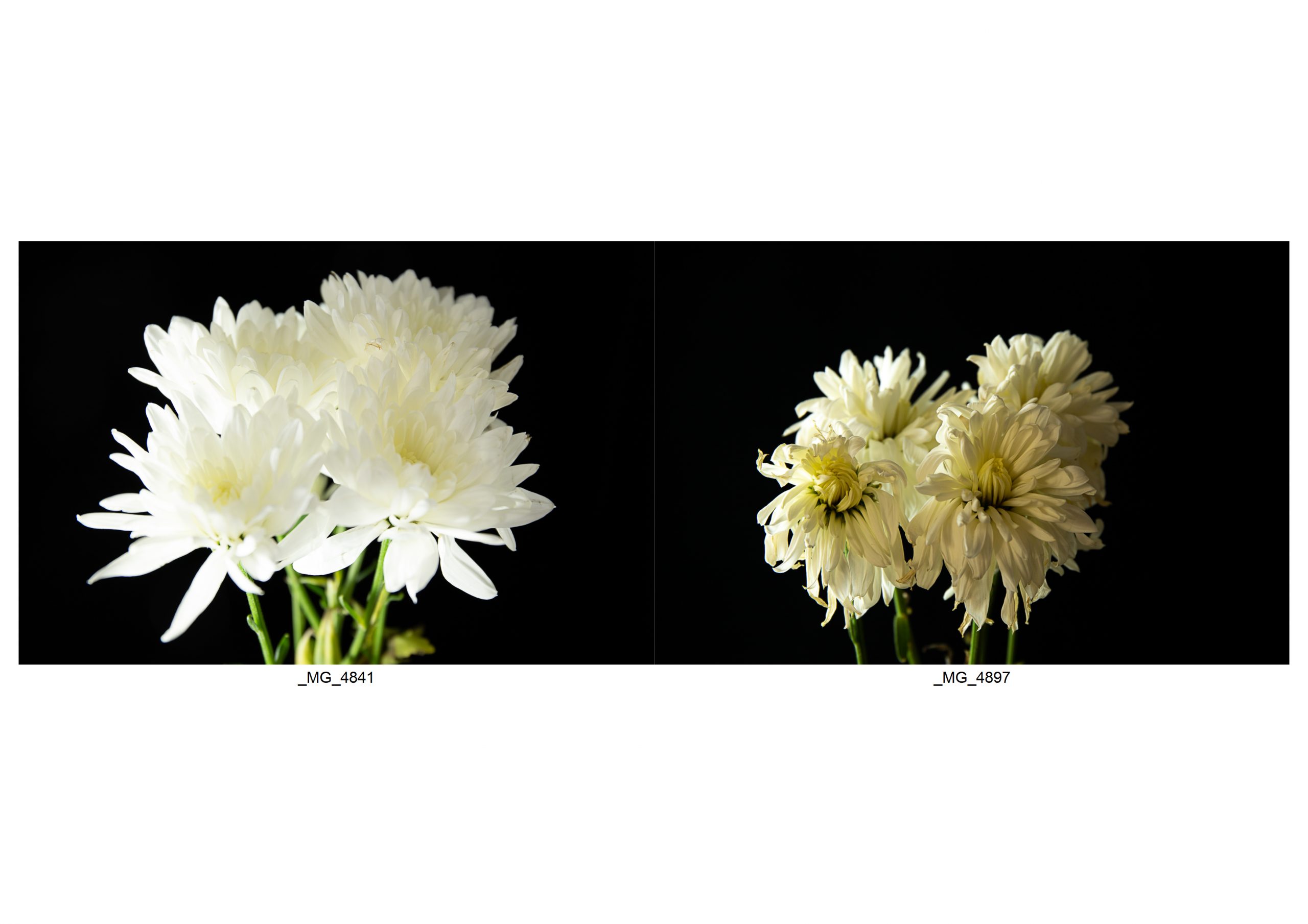 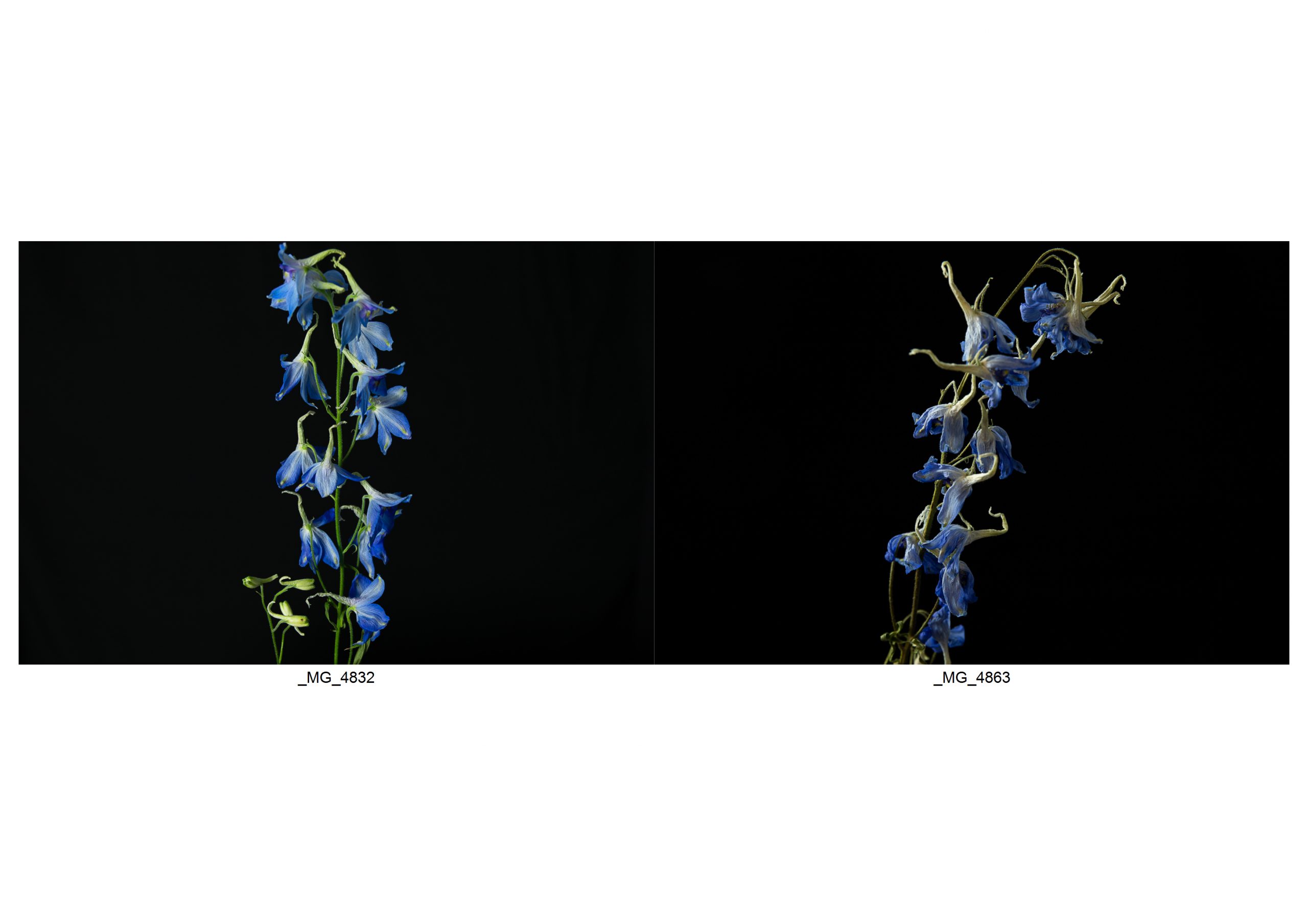 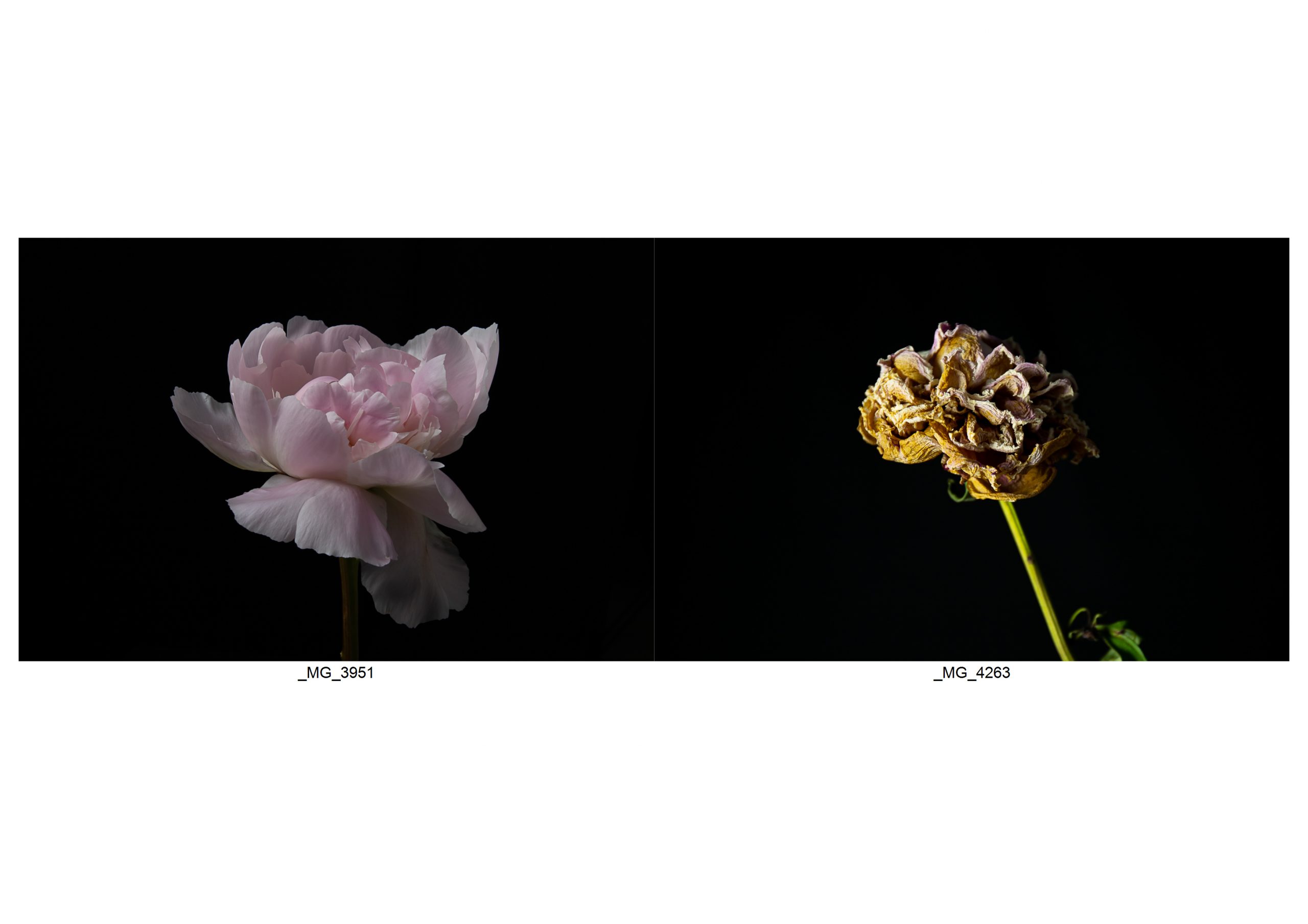 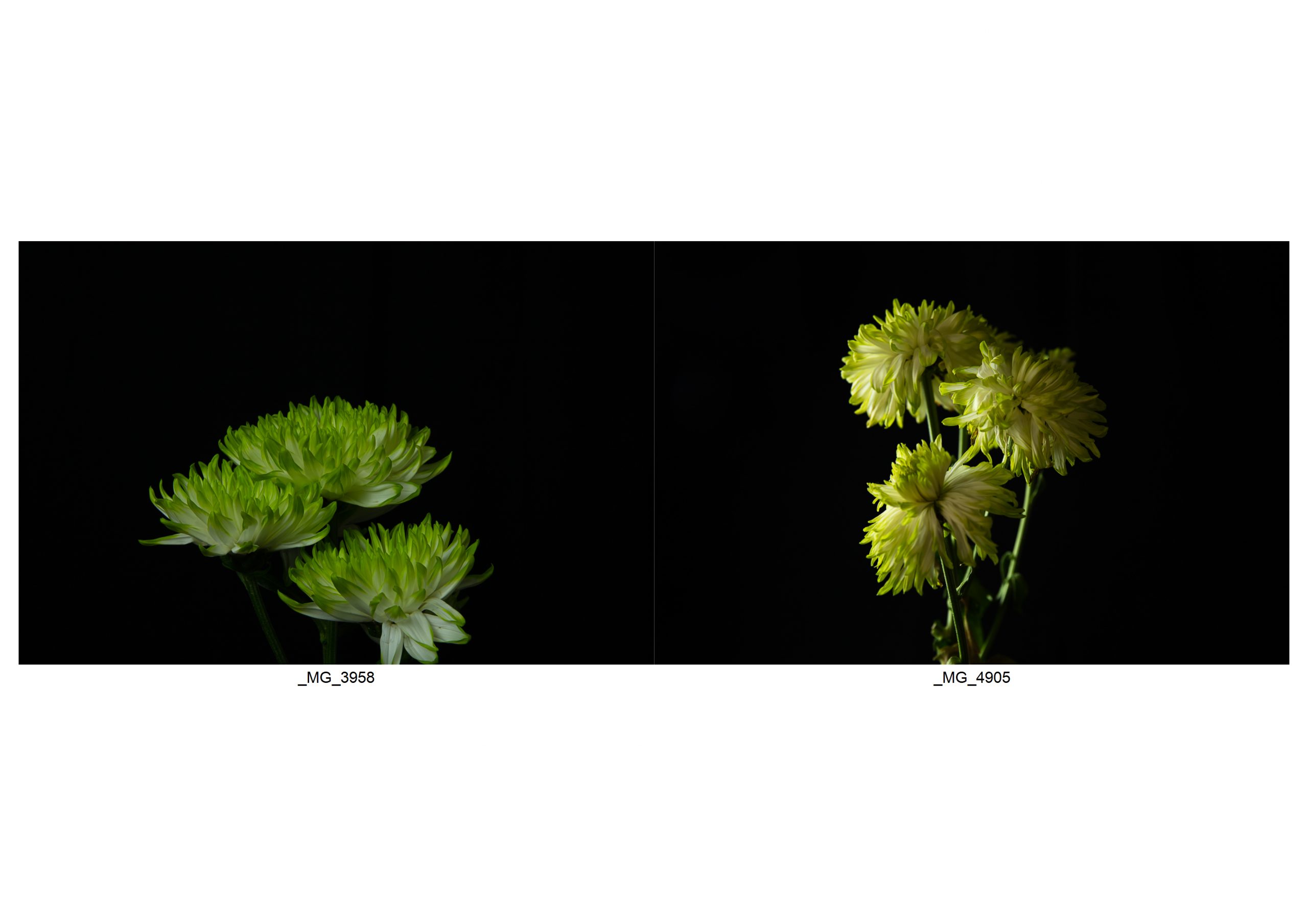 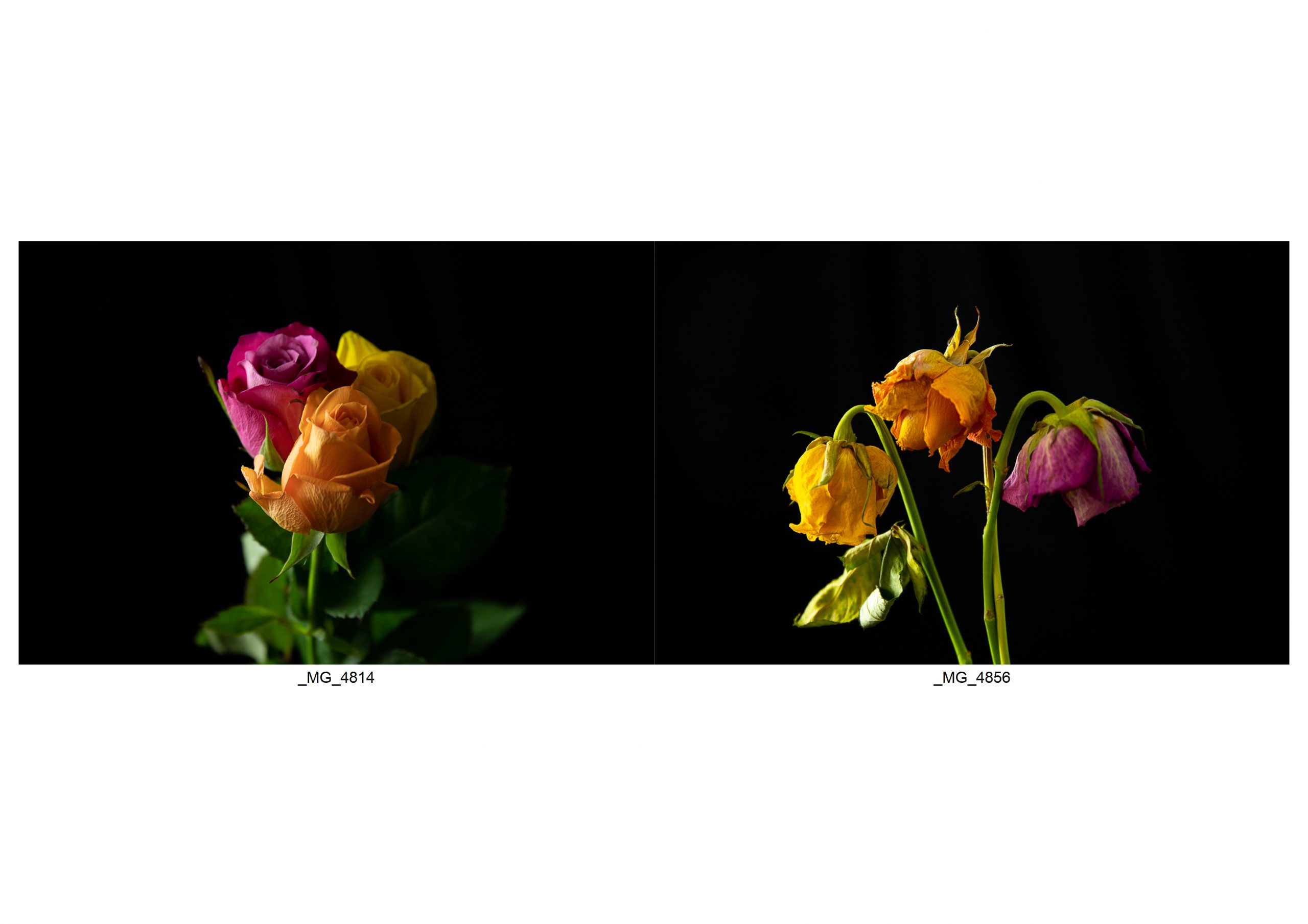 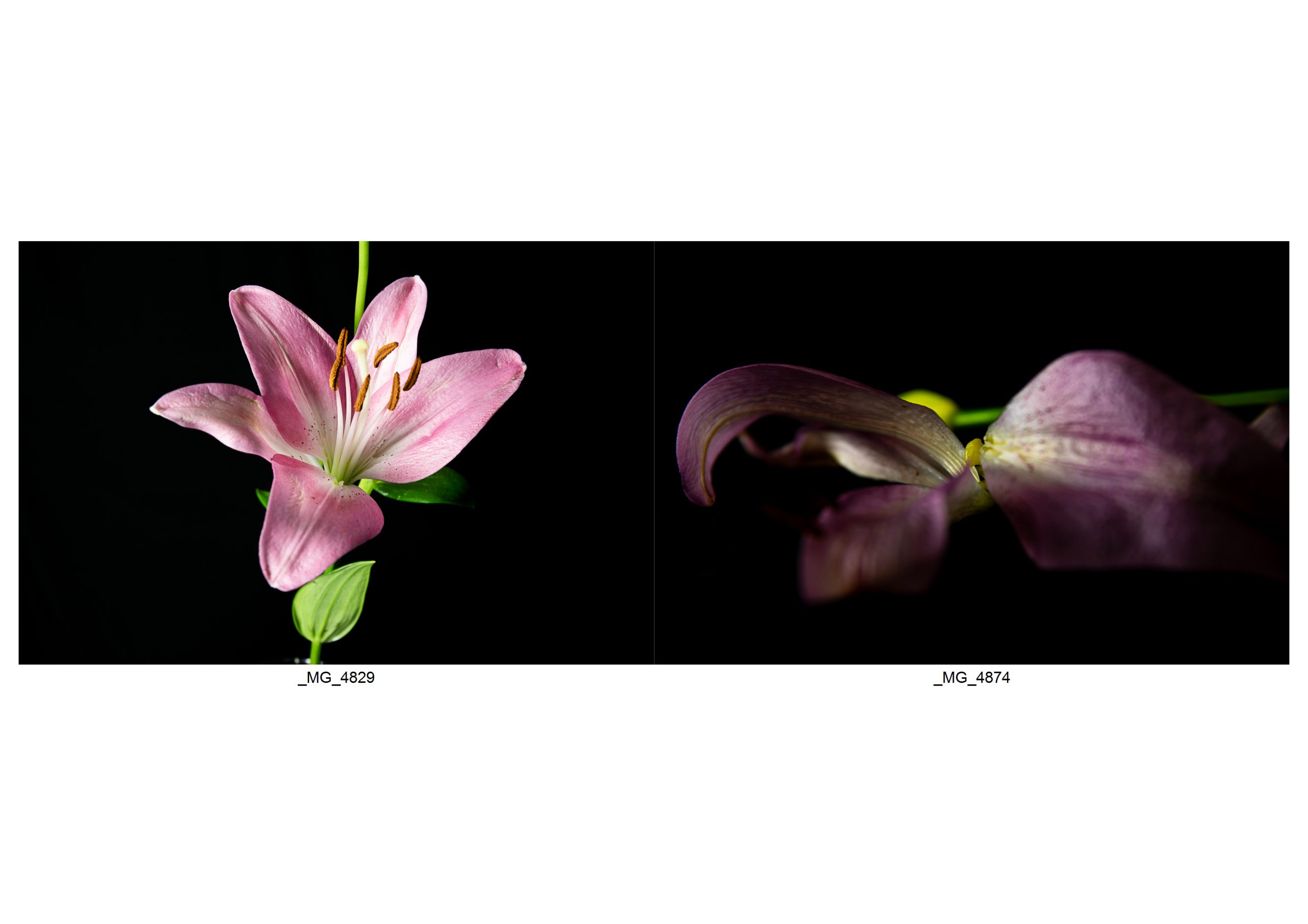 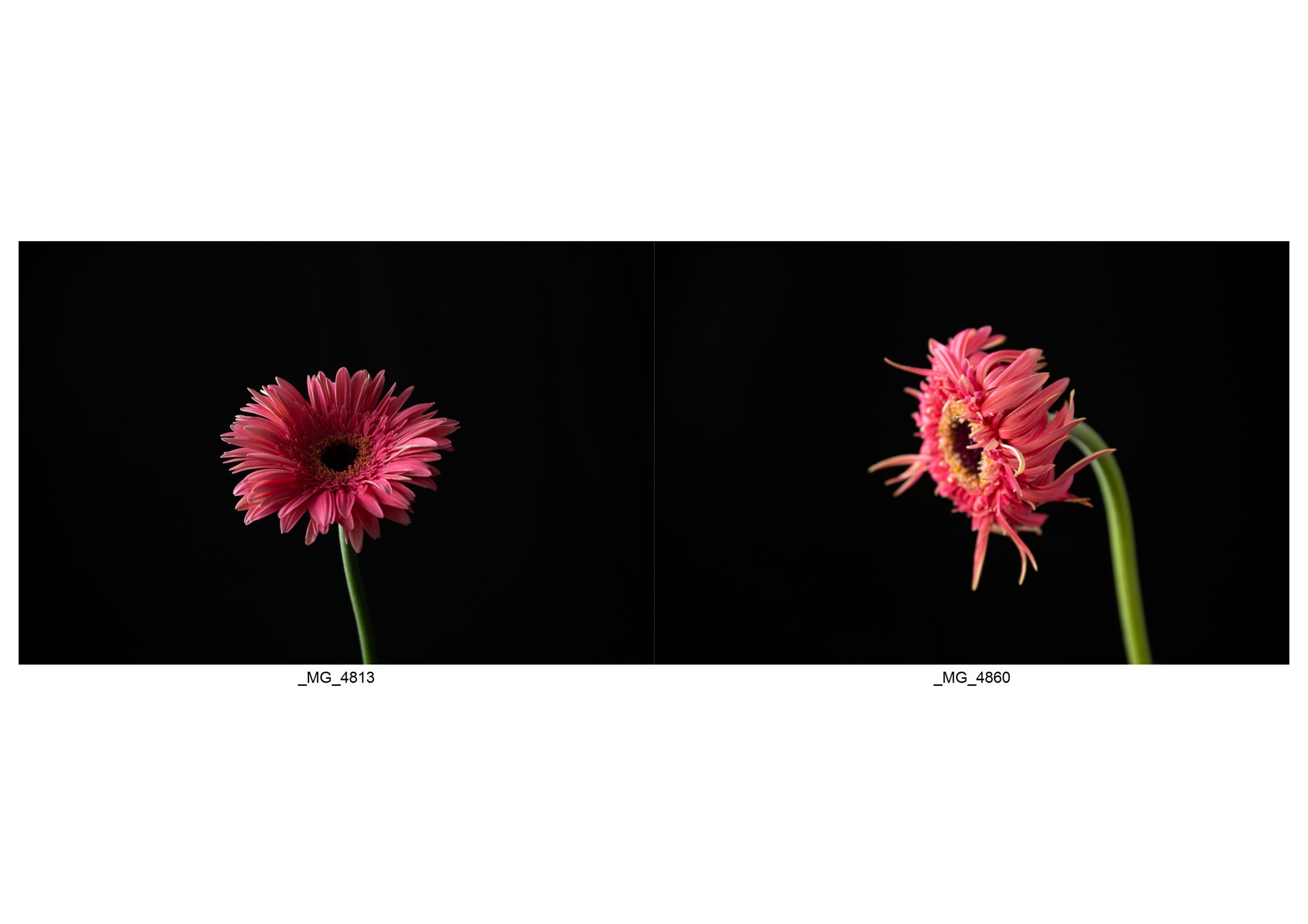 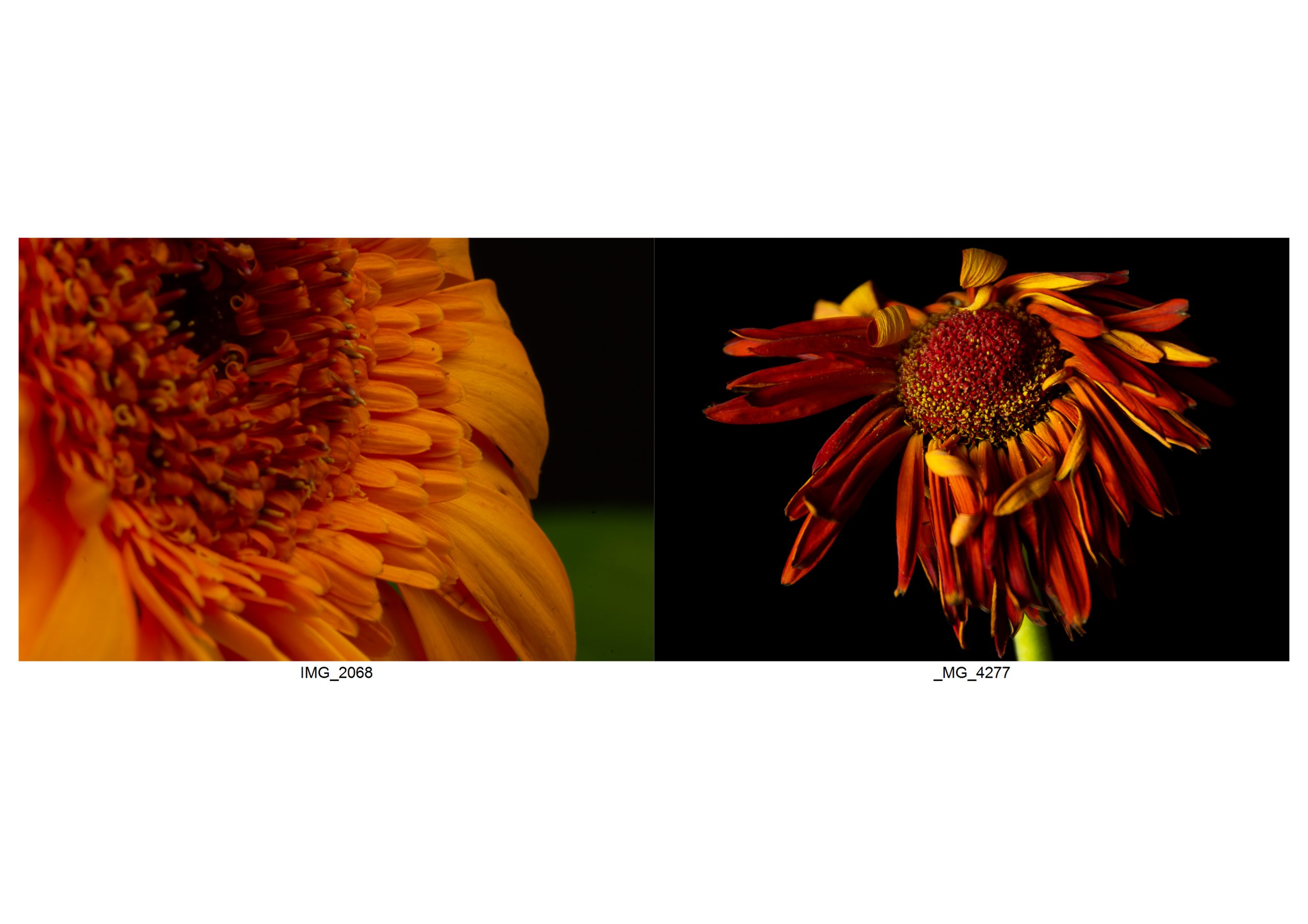 I am very grateful to have the opportunity to have another go at this given the time constraints I have been working with. I am much more satisfied with the outcome of this body of work, largely thanks to the feedback from my tutor which forced me to question my approach to this assignment. I think it has also helped that I am beginning to see the benefits of researching, even though there is still much to learn in this area, as it is where my work is at its weakest. Overall I am very happy that this satisfies all the creative and technical requirements of the brief.

I sought feedback in both attempts, I found the second attempt more beneficial as I just presented this as a concept with a single diptych rather than overloading my peers with a load of images that diluted the message I was trying to convey. Social media feedback is interesting but as pointed out by my tutor without understanding the context the message can often be lost. I originally stated that using another lens might have been more beneficial, but in the final approach I ended up taken, this is no longer the case. Based on the work of Imogen Cunningham I did go back and shoot some natural light shots from the third batch of flowers, not included in this assignment which you can find here.

It would be nice to have a larger space to work with in future so that I can experiment more with this medium of studio photography, perhaps even look for places where I can use a space to practice this more.