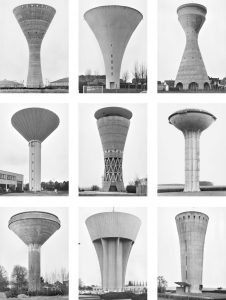 Bernd and Hilla Becher were two German photographers whose systematic documentation of their country’s industrial landscape has served as the basis for an entire school of contemporary photography. Their black-and-white images served as visual case studies or typologies of disappearing architectural relics—water towers, grain silos, gas tanks—forming the basis of their practice. “I became aware that these buildings [blast furnaces] were a kind of nomadic architecture which had a comparatively short life—maybe 100 years, often less, then they disappear,” the artists said of their work. “It seemed important to keep them in some way and photography seemed the most appropriate way to do that.” Bernd Becher born on August 20, 1931 in Siegen, Germany, met Hilla Wobeser born on September 2, 1934 in Potsdam, Germany, while studying painting at the Kunstakademie Düsseldorf, where he later taught. Their romance prompted her to enroll at the school the following year, marking the start of their collaborative career. The pair’s style has influenced a generation of photographers now known as the Düsseldorf School, which notably includes Andreas Gursky, Thomas Struth, and Candida Höfer. Bernd Becher died on June 22, 2007 in Rostock, Germany at the age of 75 and Hilla Becher died on October 15, 2015 in Düsseldorf, Germany at the age of 81. Today, their works are included in the collections of the Art Institute of Chicago, The Museum of Modern Art in New York, the National Gallery of Art in Washington, D.C., and the Tate Gallery in London

This was some recommended reading that I found quite interesting in that here you had two photographers that were able to recognise the temporary nature of structures in a modern industrialised world constantly subject to advancement and change . This held some resonance with me and my draw to landscape photography, where I work in environments that themselves are subject to the rigours of time, environmental erosion, weather, seasons and human activity.

Exercise 3.3 What Matters is to Look