Select an image by any photographer of your choice and take a photograph in response to it. You can respond in any way you like to the whole image or to just a part of it, but you must make explicit in your notes what it is that you’re responding to. Is it a stylistic device such as John Davies’ high viewpoint, or Chris Steele Perkins’ juxtapositions? Is it an idea, such as the decisive moment? Is it an approach, such as intention – creating a fully authored image rather than discovering the world through the viewfinder?

A photograph inspired by another is called ‘homage’ (pronounced the French or English way). This is not the same as Picasso’s famous statement that ‘good artists borrow, great artists steal’; the point of the homage must be apparent within the photograph. It’s also not the same as ‘appropriation’ which re-contextualises its subject to create something new, often in an ironic or humorous way. Instead, the homage should share some deep empathy or kinship with the original work. An example is Victor Burgin’s series The Office at Night (1986), based on Edward Hopper’s famous painting of the same name:

‘The hackneyed idea of ‘influence’ is not at issue here. I am not interested in the question of what one artist may or may not have taken from another. I am referring to the universally familiar phenomenon of looking at one image and having another image spontaneously come to mind.’

You may already have taken some homage photography where you’ve not tried to hide the original inspiration but rather celebrated it. Refer back to your personal archive and add one or two to your learning log together with a short caption to provide a context for the shot.

I have chosen Michael Weseleys, series “Still Lives” which were a series of photographs taken for his book published in 2007 representing a series of long exposures, each taken between a few hours to over the course of a week to illustrate the life cycle of cut flowers. Weseley is known for building his own cameras, utilising a combination of small diaphragms and neutral filters to achieve the desire result. I have long been a fan of long exposure photography, but it was not until I started this course that I became aware of his works. I realised at this point that I had only just started to scratch the creative surface of what I could do with my camera. Photographs like these often leave me with the question “How did he they do that?”. The context to me is clear it is a life cycle from bloom to decay, it reminds me of nature programs where you see time sped up so that changes in season or environment become instantly observable and it is quite beautiful to see this captured in one long exposure. Below is one of Weseleys’ images taken from “Still Lives”: 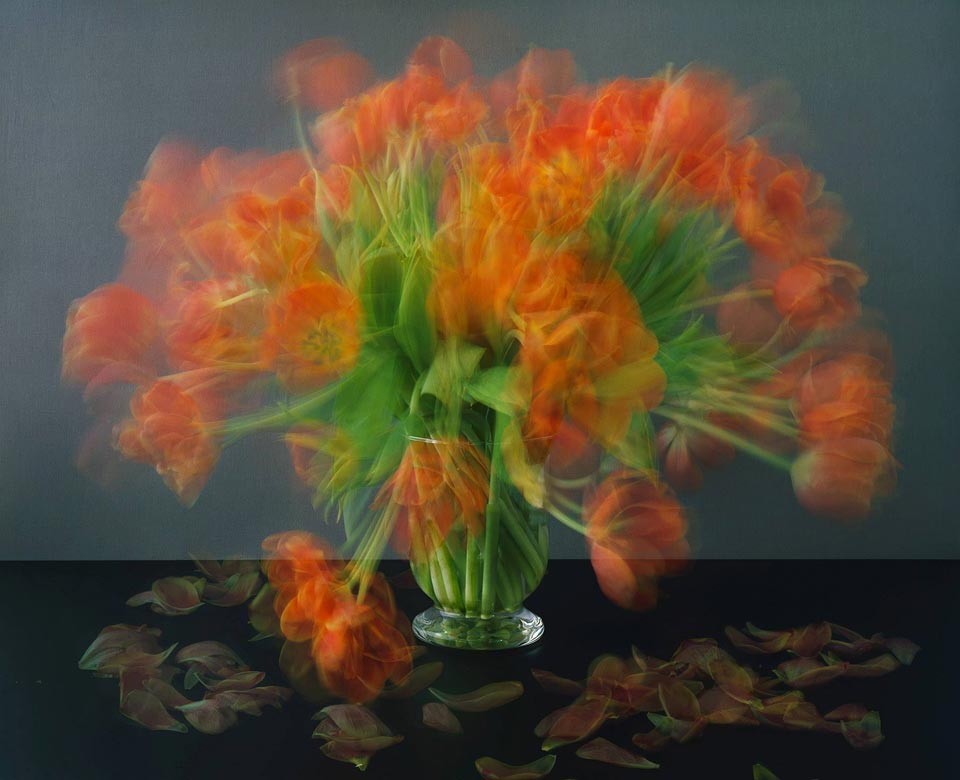 I had come across Weseleys work earlier in the course and when I first saw these flowers, I thought I have to try this. The idea came to mind from my experiments with multiple exposures in exercise 3.2 Trace, where I had taken multiple exposures of my hand and knitted them together. The image I have chosen to use in response is in the style of Weseleys’ work, though taken from a technically different standpoint using multiple exposures. I do not have the equipment yet to fully explore longer exposures, so I had to improvise and opt for a slightly different approach. In this instance I took a vase of Daffodils and placed them in our conservatory where the light was good and setup the camera on a tripod. Over a period of about a week I took a series of exposures showing the different points of the life cycle of the flower. I would later knit these together in lightroom to produce the result you see below:

I do look forward to purchasing a power source for the camera that will allow to explore long exposure photography further in the future.