Take three or four exposures of the same scene. Don’t change anything on the camera and keep the framing the same.

Preview the shots on the LCD screen. At first glance they look the same, but are they? Perhaps a leaf moved with the wind, the light changed subtly, or the framing changed almost imperceptibly to include one seemingly insignificant object and exclude another. Time flows, the moment of each frame is different, and, as the saying has it, ‘you can’t step into the same river twice’.

Now bring up the histogram on the preview screen. The histogram is a graphical representation of exposure – the camera’s sensitivity to light. As you page through the images you can see small variations in the histograms. Even though the pictures look the same, the histogram data shows that in a matter of seconds the world changes, and these subtle differences are recorded by the camera. If you refine the test conditions – shooting on a tripod to fix the framing, moving indoors and closing the curtains to exclude daylight – still the histogram changes. Probably some of the changes are within the camera mechanism itself; still, the camera is a sensitive enough instrument to record them.

Add the sequence to your learning log with the time info from your camera’s shooting data as your first images for Part One.

This created a little bit of a confusion as there are a number of auto modes on the Canon D6 Mark 2, Creative Auto, Intelligent Auto and Program Mode. Subsequently I have opted to use Program mode where Shutter Speed and Aperture are set automatically by the camera. I took four exposures of a glass tea light holder in our conservatory. Part of the rationale behind this decision was to try and manage the environment , in order to see how sensitive the sensor was in the camera. Whilst all exposures used the same settings, there are some noticeable differences in the histogram data for each exposure. 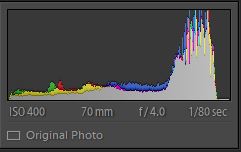 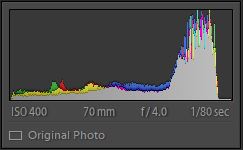 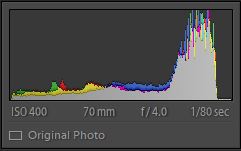