Start by doing some of your own research into the photographers discussed. Then, using fast shutter speeds, try to isolate a frozen moment of time in a moving subject. Depending on the available light you may have to select a high ISO to avoid visible blur in the photograph. Add a selection of shots, together with relevant shooting data and a description of process (how you captured the images), to your learning log.

It is fair to say Muybridge in the absence Muybridges professional work, he led a very colourful life. That said Muybridge did much to document the history and life of the 19th century, whilst developing the field of photography. His main accomplishments would advance the development instant photography, designing a high speed electronic shutter and elctro timer which would be used alongside a battery of upto 24 cameras, each camera would take a single exposure which would build into a body of work depicting motion. When this was used in conjunction with Zoopraxiscope projection machine with each exposure shown in sequence, it became clear why he came so close to producing early cinematography.

The first thing that stood out for me with Worthington was he was a distinguished physicist best known for his works on fluid mechanics. Photography for Worthington was an extension of his work pioneering techniques for high speed photography to record and observe splashes.

Looking at Edgertons bio, it was clear from an early age he had the soul of an artist and the mind of an engineer, from messing around with machines from an early age fixing and putting them back together. Harold also to a keen interest in his uncles work as a Studio photographer. Between 1925 and 1931 Harold completed his Bachelors degree, Masters Degree in Electrical engineering and subsequently his PhD. Much of Harolds career involved developing stroboscopic technologies in his work at the University initially for use in industry in identifying problems with machinery and then in flash photography going to see its increased use in photo journalism, much of his own works including thatr of the aptly named coronet

What struck me about all three of these gentlemen, is that they increased the functionality of the camera by developing technologies and techniques to bring about solutions to problems they wanted to solve.

So for this exercise I decided upon the simple idea of balls in motion, so I bought some balls which my 3 year old nephew now has and had my wife dropped them down the stairs whilst I photographed them coming down. For this I used a Canon 6D Mk II set to F4 and set to Aperture Priority Mode fixed to a tripod. I ended up photographing two sequences, one of those with a black sheet on the stairs. For some reason I thought the balls might stand out more, though I cant say which sequence I liked better. 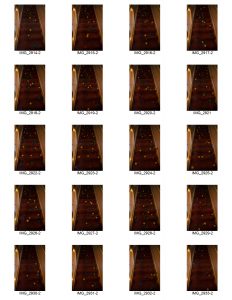 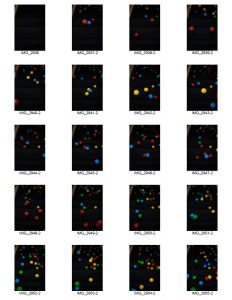 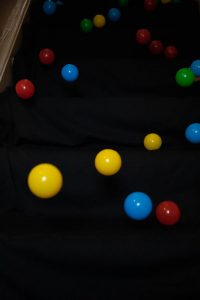