Start by doing your own research into some of the artists discussed.
Then, using slow shutter speeds, the multiple exposure function, or another technique inspired by the examples above, try to record the trace of movement within the frame. You can be as experimental as you like. Add a selection of shots together with relevant shooting data and a description of your process (how you captured the shots) to your learning log.

I started by doing some research into the artists mentioned and I was struck by the diversity of content that each artist brought to the concept of time each involving movement of some kind in each exposure over a period of time.

Woodman makes very good use of the space and time around her which is evident in the work she produces. I get the feeling that use of herself in these exposures is a well engineered attempt to redefine identity beyond that which is biological. Whether this was a response to a brief or not, there is an emotion attached to the work she produces, whether laid bare or barely visible in an attempt to free herself from the confines of the image being taken. I found her works very interesting.

Vanvolsems work still has me perplexed and in awe, the work reminds me a little of the panoramic images I have played with on my phone camera from time to time. They appear simplistic, skewed in perspective, yet they are more than that. Again they play with aspects of time whether that is movement of the camera or an element within the frame of the exposure being taken.

Wesleys work reminds me a lot of time lapse video where you get to see the life cycle of a building being constructed at a vastly increased rate of speed. In this instance Wesley manages to show us this illustration of time within one exposure. His work has shown the construction of buildings, the lifecycle of cut flowers and crowds gathered watching world cup matches to name a few. His exposures have lasted from a number of minutes or hours to days, months even years. This is something I will definitely look at experimenting more with over time and hopefully illustrate in my learning log. I am intrigued by the thought and planning that goes into the execution of each project, which really does show through in the end result of his finished works.

This is one area I look forward to revisiting as I develop my technical and creative ability further, but for the purpose of this exercise I decided to experiment with a number of concepts of time. The first image was just an excuse to use the boys toy racing set to record the movement of a couple of racing cars on the track which was laid on a black sheet and curtains closed. The second exposure was of a previously shot image that I used the zoom on over a longer exposure. Similarly with the third exposure I achieved the end result through slight camera movement during the exposure. The final exposure was a multiple exposure handheld shot of my left hand. 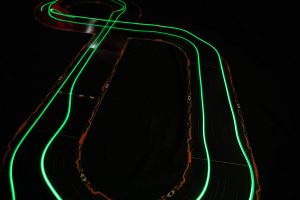 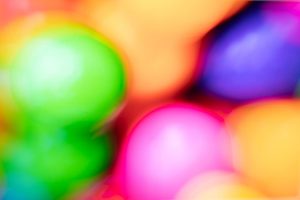 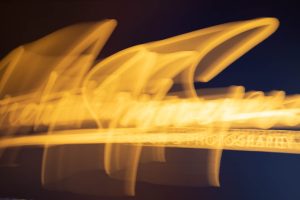