In our earliest years we know a patch of ground in a detail we will never know anywhere again – site of discovery and putting names to things – people and places – working with difference and similitude – favourite places, places to avoid – neighbours and their habits, gestures and stories – textures, smells – also of play, imagination, experiment – finding the best location for doing things – creating worlds under our own control, fantasy landscapes. (Professor Mike Pearson)

Photographers and artists have always found inspiration in their immediate location. There is a concept within Welsh culture called Y Filltir Sgwar (The Square Mile), described above by Professor Mike Pearson. It is the intimate connection between people and their childhood ‘home’ surroundings. Use this ‘sense of place’ as the starting point for your first assignment.

Make a series of six to twelve photographs in response to the concept of ‘The Square Mile’. Use this as an opportunity to take a fresh and experimental look at your surroundings. You may wish to re-trace places you know very well, examining how they might have changed; or, particularly if you’re in a new environment, you may wish to use photography to explore your new surroundings and meet some of the people around you.

You may wish to explore the concept of Y Filltir Sgwar further, or you may deviate from this. You may want to focus on architecture and landscape, or you may prefer to photograph the people who you think have an interesting connection to the square mile within which you currently find yourself. You’ll need to shoot many more than 12 photographs from which to make your final edit. You should try to make your final set of photographs ‘sit’ together as a series. Don’t necessarily think about making a number of individual pictures, but rather a set of photographs that complement one another and collectively communicate your idea. You may wish to title your photographs or write short captions if you feel this is appropriate and would benefit the viewer.

Think of this assignment as a way to introduce yourself to your tutor. There’s no ‘right’ or ‘wrong’ way to respond to this brief, as long as you try to push yourself out of your comfort zone in terms of subject matter. Try out new approaches rather than sticking to what you think you’re most successful at.

I was filled with dread as I felt beyond a place that I call home, that I had little or no connection with the area. I spent much of my younger years overseas with my father being in the armed forces. Any connections I had as a child were punctuated by moving from one place to another and starting all over again. The same for the area of Doncaster where I have lived for nearly 20 years with my wife, spending much of my time on the road travelling for work with my time split between two towns. Initially I considered using the allotment as a piece but given the time constraints I have experienced it would prove to be a much bigger task organising. In the end I settled on the roads within the area where I live as they have been at the core of my journey and my connection to home.

As part of the research undertaken for this assignment, I looked at the works of Gawain Barnard. There were aspects of Barnards work I struggled to connect with such as “maybe we’ll be soldiers” whereas there were others that struck a chord with me, in particular was the sequence “journeys by train” which likened itself to the images of my own life and travel being as much a necessity for work as it was to connect me with my family.

For this sequence I took an early morning walk with a Canon 6D with a 24mm-70mm lens mounted. I chose this time of day as it often represented the time, I would normally travel home, wherever I was travelling from.

As I shot this sequence in RAW format, I used Adobe Lightroom to set the white balance (cloudy), convert the images to black and white along. I also selected a lens correction for the lens used on the shoot.

There are several things I should have done here to improve the sequence. Technically I should have set my ISO to 100 as many of the images were set to auto and my F-stop should have been at the higher end such as F18 or F22 for a greater depth of field.

There are a couple of areas I could revisit with this, the first being to decide on framing the photos in either portrait or landscape mode to give a feel of continuity throughout the set. Another thought I had was whether I should have opted for a more singular approach by continuing the set on foot or retracing the whole subject from the in-car perspective. 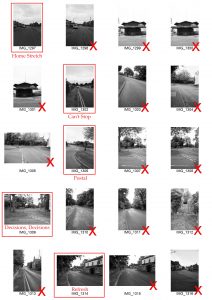 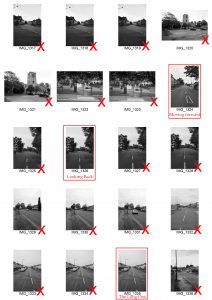 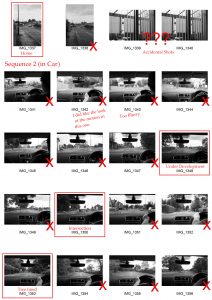 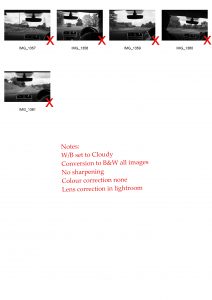